A Brief History of the Minnesota Mineral Club

The Minneapolis Mineral and Gem Club was organized in 1935 as a Science Museum Society of the Minneapolis Public Library Museum and continued formally until early 1942. Members who remained in the cities during the war continued to meet informally at private homes.

In late 1945, William Bingham, the last formal president of the Minneapolis Mineral and Gem Club, convened a meeting at Pillsbury Hall on the University of Minnesota campus. Five of the thirteen attendees agreed to serve on a constitutional committee to establish a new Club.

The first official meeting of the newly formed Minnesota Mineral Club was convened on December 8, 1945 at the home of Mr. and Mrs. Bernard Dahl. Half of the 26 attendees became official members that night and selected a slate of seven initial officers to serve until the first annual meeting, to be held on March 9, 1946 at the Curtis Hotel in Minneapolis. Sixty-six members attended the first meeting.  Of these, 43 were active members; 22 were associate members and one, Dr. H. C. Hake, of Portland, Oregon (editor of the Mineralogist Magazine), who helped organize and name the Club, was elected an honorary member. William Bingham was elected as the Club’s first President and served in that role to 1948.

The Club’s first annual exhibit (show) was held on Saturday, April 14, 1946 at the Curtis Hotel. Twenty-six members provided exhibits, which were judged competitively. The first issue of the Rock Rustler’s News was published in May 1946. The first field trip, to collect near Stillwater, was held on May 12, 1946.

Members of the Minnesota Mineral Club (MMC) visited the Minneapolis Convention of the Midwest Federation of Mineralogical Societies in October 1946 and joined the federation that year. (Since then, numerous members of the Club have served both the Midwest and American Federation in various leadership roles.)

The Minnesota Mineral Club was officially incorporated on February 15, 1950.

Bill deNeui is one of the founders of the American Federation Scholarship Foundation and served as its first Treasurer.  He is also responsible for registering the Foundation as well as the MWF and the AFMS as Minnesota corporations.  A member of the MMC serves as the official registrar for these corporations.

MMC members successfully lobbied the state legislature to have the Lake Superior Agate named as the state gemstone.  This is just one aspect of the Club’s love affair with Lakers.  In 1988, the Club hosted the “Night of the Lake Superior Agate” where members and guests could actually see some of the more famous Lakers and hear from agate author, Club member Scott Wolters.  In 1995, Night of the Agates II again brought many local agate lovers together for an all agate exhibit and presentation.  “A Celebration of Agates” show, sponsored by the Club, was held in 2012.

Club member Mike Carlson created the large format book “The Beauty of Banded Agates” with photos by fellow Club members Pete Rodewald and Dennis Westman. Pete and Mike, along with member Larry Costigan and his son Brian, were invited to participate in the International Agate Show held in Munich, Germany in October 2005.

The Minnesota Iron Ranges provided rewarding collecting sites while the mines were operating and owners were less concerned about security and potential lawsuits.  MMC members collected there often, especially on the Cuyuna Range near Rabbit Lake.  Bill Bingham found a red and yellow fibrous silicate with inclusions of goethite, which is now known as Binghamite, a variety of Quartz.  Another Club member, Ray Lulling later found a more opaque and more coarsely fibrous quartz material, which he named Silkstone, after determining it was indeed different than Binghamite.

Ray Lulling, of Silkstone fame, was better known for his lapidary work.  In the early 50s he fashioned a Club gavel with the appearance of an Estwing rock pick.  The hammerhead is Binghamite and the handle is bands of Minnesota minerals.  It is encased in a leather sheath with a Thomsonite button.  The gavel is presented to each incoming president and displayed during the Club’s annual banquet.

Following a discussion on the need for a device for calling Midwest Federation meetings to order, William de Neui fashioned a traditional gavel head out of Wyoming jade and inscribed the dates 1940 – 1960, in celebration of the first twenty years of the federation.  A local woodworker fashioned the handle for the gavel. De Neui also made a small case to protect the gavel.  This gavel is also presented to the incoming Midwest Federation president each year. 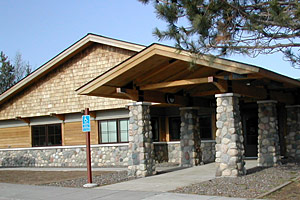 Thanks to the dream of one determined man, the Moose Lake Agate and Geological Interpretive Center at Moose Lake State Park is a reality.  Dedicated in 2004, the center is devoted to Lake Superior Agates and minerals of Minnesota.  The Club contributed funds toward the showcases in the center and various members lent or donated pieces from their collections.  MMC member Phil Gotsch championed the cause across the state and encouraged local Clubs to work together to create MAGIC. 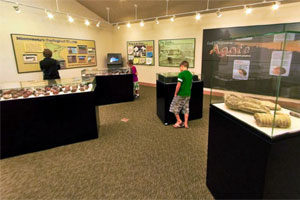 What to do with all those rocks?  During his term as Publicity Chair, Dennis Westman decided that local schools could use the MMC’s surplus and the MMC could reach potential rockhounds.  With the Club’s blessing he created fifteen mineral boxes and gave them to local teachers.  Each year, he would make fifteen more boxes and give them to teachers.

The Science Museum of Minnesota offered the MMC an opportunity to participate in their Community Based Science Organizations project.  Using the resources provided, the Club began expanding the Mineral box idea and is working with the Anoka Schools to place general and Minnesota collections in that district.  The MMC is working with teachers to make the mineral boxes more useful and to help students discover that rocks are fun. 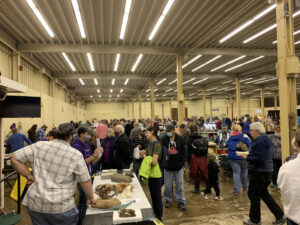 The Club’s educational exhibits were held yearly up through 1996.  Then, interest waned as reasonably affordable venues became harder to find.  After much urging, the Club agreed to host the 2003 Midwest Federation convention, which meant hosting a three-day show.  A committee was set up and planning began for Great Lakes, Great Rocks -The Land of 10,000 Lakers.

After a successful 2003 event, the Club decided to continue hosting a sales and educational show, featuring the many facets of the rockhounding hobby.  The show committee ensures a mix of local and out of town dealers, as well as presentations, demonstrations, exhibits and an extensive “Kid’s Corner.”

Sadly, we were forced to cancel our 2020 show because of the pandemic. Thankfully, in September 2021 we were able to host an expanded show at the Minnesota State Fairgrounds. We look forward to returning there in 2022!